The Kaiser’s armies rolled through Lorraine in 1914; Cerise was six. Her father spent the next few years in a German prison, too patriotic for his own good — never mind that the French hadn’t been too fond of Lorrainers back before the Franco-Prussian War anyway. She and her mother managed to scrape by until the Germans gave up control of the region in 1918. Still holding on to their superstitions, they buried St Joseph in the yard, sold the house, and moved away from the border and the memories, to Rheims.

In the fall of 1925, her mother called her over after supper. Rosalie explained that she had been putting money aside, even before the war, to send Cerise to Paris to study — without the knowledge of her husband, who had nothing but scorn for the uppity garçonnes in the capital campaigning for equal opportunity and even (heaven forfend!) the vote. She left the next weekend.

Cerise had not had much formal schooling in childhood, but took well to most of her studies and was well-liked by the professors. She learned at least as much outside of school: Rheims was a big city in its own right, but Paris was the center of the world. A part-time job as a bartender paid most of the bills, keeping her mother’s gift from disappearing too quickly. A few years in, and life was going well.

For a long time afterwards she had no idea who to blame for her ruin. It had been an exhausting night at the bar. She’d had a couple of drinks afterwards to unwind — Arnaud didn’t care as long as she didn’t go overboard — and, as far as she remembered, returned home and went to sleep, only to wake up thirsty and screaming as the morning sun burned her arm.

Months passed before Cerise pieced together what actually happened. Studies and job were forgotten in the search; she lived off her savings, and when those ran out resorted to selling her body. But over time, she tracked stories of occult experiments and strange collaborations down to the office of the academy’s director, Didier Montfort. The old man was regarded as a good-natured eccentric at the school, but by this time she knew better.

Didier turned out not to be the monster — only a good friend of it. She couldn’t quite figure out what his stake in the situation was; who sets up an experiment and leaves it alone for months? But a polite request and a pistol get a lot of answers, and even if Didier’s answers were mostly incomprehensible he at least introduced Cerise to the man directly responsible. The bastard was pathetic, a sniveling delinquent less than a year changed himself. She got the name of his sire and left him with an extra hole in his head.

Gilles was a much more agreeable person. Once he got over the surprise and finished cursing the kid and himself for the incident, he took her under his wing and made the proper introductions to Kindred society. After that was taken care of he mostly left Cerise to her own devices. Returning to school was out: Didier would make that entirely too difficult. She considered leaving Paris, but the search for her sire had shown her her niche as a keeper, discoverer, and purveyor of secrets; and once she moved up a little bit she’d be in the perfect place to make that work for her.

The Nazi invasion hasn’t changed things too much for Cerise. Fascists are happy enough to frequent her establishment, and their money is as good now as the Third Republic’s was five years ago. And some of them like to tell the girls the most… interesting things. Like about that new Kommandant — there’s a lot to be told about him, and she can’t wait to hear it all. 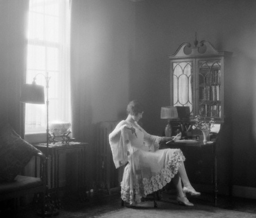